Главная / About us / Awakened students / Story of awakening: Olga Savoschik
back 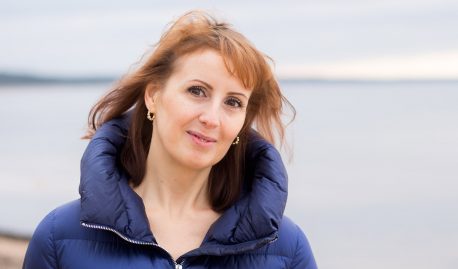 How did I make my way into practice?

It’s difficult to say when exactly it all began. I practiced sports (it was kayaking) from the second grade. I saw dreams that were prophetic, tried to feel what Life wanted to tell me by doing that. I read lots of books about psychology and self-development. Nine years ago tragedy happened with my family. We lost my dad, aunt and my brother within a year and my mother was emotionally ruined. Now I know that Life led me through that combining path of suffering with signs. I got health problems. I won’t tell everything in details, but it was difficult. And then came the time when everything in life turned back to good, but my health became even worse, because I worked a lot, I worked hard without any rest. Stress and void appeared inside me. As well as hatred to relatives and friends. I was eager for joy, happiness, love and good relations with my mother. I wanted to make her happy, joyful and laughing but not visa versa. I began to work on myself trying different methods and techniques. Now looking back I feel sorry for the time I lost. Now I understand that it was like riding a bike with my eyes closed, trying to reach some goal. And when you’re in a team it’s like taking a plane.

The most valuable things are time and knowledge that teacher gives you.

In one of the books I came across words saying, “Teacher will help you to reveal all abilities that are already inside you!” From that moment I knew that I was in need of a teacher. Teacher appears when learner is ready! Those words are not that empty, I prepared myself for the meeting working hard on myself.

One day surfing in social networks I saw a small passage from the book written by Andrey Bashun Talking with an Angel. After reading a few pages I felt like I would find answers in that book. I wanted to know what was hidden within us? What potential do we have? Who are we and where are we from? From that book I learned that there was s a school where practices are taught. “I need to go there”, I said to myself. I called there and made an appointment. At the first lesson I was lucky enough to meet an amazing woman whose name is Nadezhda Giannitti. She published that very passage from Andrey Bashun’s book in the social network! We had a little chat after the class. After the first lesson I told instructors confidently. “I need the Teacher, I want to learn from him.” Then there was a break for a year, when I continued to observe myself on my own. I remembered the moment when a phone rang and I was invited to a meeting with the teacher Genadiy Givin. I realized that I needed to get there and at the meeting I felt that he is my Teacher! My decision was made!

Then there was the course called Open Heart, which was the first serious step in my learning, first contact with practical knowledge. I would not say that it was easy, there were difficult moments mixed with interesting experiences. My body ached from exercises. I faced irritation and mood swings from unreasonable tears to laughter. During the day there could be several of them. In the mornings it was hard to get up and to do exercises. My desire to change my life and to meet the teacher made me move forward as well as responsibility for all those with whom that step had to be made.

Later on I faced other obstacles on the way. There were moments that were very difficult for me, when everything inside me rebelled and hurt. It could be seen even on my body, because I was so much stuck in my comfort zone. Although there were very good results from practicing, there were moments when I just had to do routine inspite of everything that my mind and other people said. I found a way to overcome that by asking myself “Do you really want to awake now? Be honest with yourself! Do you really want to awake?! Do you want to awake now or do you want to waste your life?!” I answered “Now” and moved forward towards awakening!

My great desire to awake faced new resistance which alternated with new experiences. By overcoming resistance I felt myself better and pressure left. Life led me gently into awakening, giving me a sense of one more edge and even showing new colors of the world, introducing me taste of freedom. I had to do something to move towards it. And I did warming up for that desire to awake and moved slowly to my goal.

In June I went to a closed circle retreat in Latvia. It was emotional for me, but I decided that once I arrived I had to squeeze everything out of the course and work hard. It was rather helpful that there were new people who came from different countries. It was necessary to work hard to help newcomers and cheer all the team up.

Awakening happened on the last day of the course, when I was outdoors. I was doing my individual program and at some point I was gone and I became everything. I turned into singing of birds and came back. I was the wind, I was grass, I was trees, I was everything around. I was just a part of everything. Me myself was all that’s happening. And I was overwhelmed with absolute love that was boundless and spread to everything and everyone around. Later at night I got frightened. My fear was very strong, black and viscous. My heart was beating really fast and I thought it’s going to tear apart into thousands of pieces. I felt my fight with that fear and then at some moment I realized that fear was me myself. So resistance weakened, pressure decreased, heart beat evenly, fear began to back away, i was dissolving and disappearing. It popped like a soap-bubble.

What changed after awakening?

I feel Freedom. I feel free from the world of mind and feel unconditional love. It’s like fresh air. I realize that it was only the beginning and there’s still a lot to do. I am Light Conductor in this World and I want to become even cleaner to share even more Light. And I really want as many people as possible to awake, to become happier and freer. We need a retreat center where people will get knowledge and study. I want to share this knowledge.